Where to see my work.
David has his own designated space within Harding House Gallery in Lincoln. The gallery also features ceramics, glass, photography, textiles, jewellery, sculpture, calligraphy, prints, abstract and landscape painting, plus a fine array of original greetings cards. If your looking for unique, handcrafted gift ideas, call in and see us.
Harding House Gallery...

Please keep checking this page for all the latest news, events and exhibition dates. If you would like to be added to my database to receive invites to exhibitions and events please contact me.

My lifesize horse sculpture will be attending Belton Horse Trials on 13th, 14th & 15th April 2018. Come along for a family fun day out! 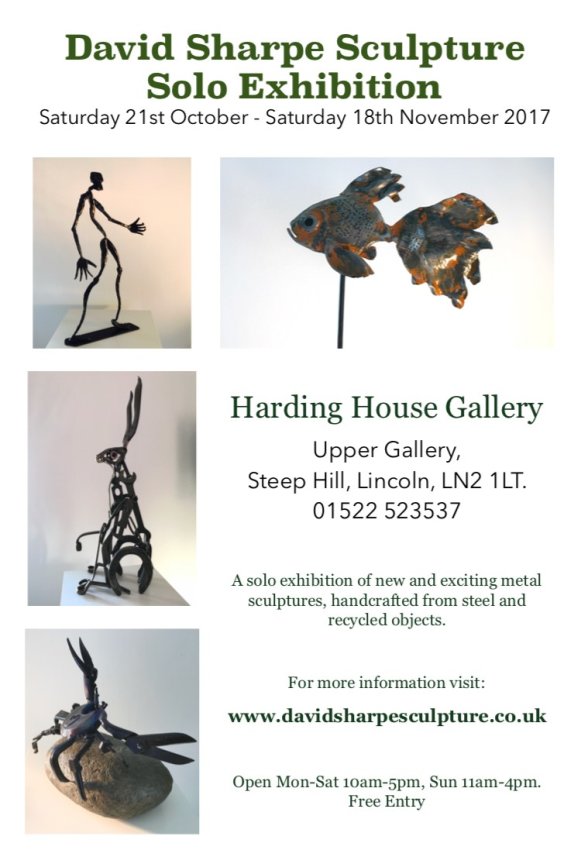 David will be exhibiting a selection of his metal bird sculptures at the Natural World Visitor Centre at Whisby.
'Birds On The Wing is a stunning exhibition that explores the life and beauty of both garden and wetland birds. A range of media, craft, art and photography has been created by local practitioners, with all work on display available to purchase. ‘Birds on the Wing’ features photography by Wildlife and Swan Photographer Anne Waterfield whose body of work ‘All about Swans’ has previously exhibited at the Discovery Centre at Clumber Park'. ...more

On 21st October 2015, David constructed 3 bale sculptures around North Lincolnshire. One at Uncle Henrys Farm Shop, one at The Willows Garden Centre and one at Claxby Viking Centre. 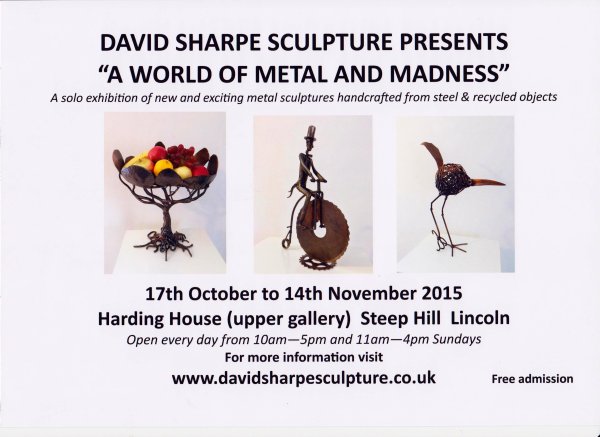 A fitting tribute to the local heroes of World War One was made on Thursday 6th November 2014 when a sculpture was unveiled in Wyndham Park, Grantham.

The sculpture, inspired by the Machine Gun Corps which was based on the Belton estate during the war, was unveiled by the Lord Lieutenant of Lincolnshire Tony Worth.

The rededication event commemorated the 100th anniversary of the passing of Captain The Hon William Reginald Wyndham, after whom the park was named, at the 1st Battle of Ypres on November 6, 1914.

Designer Daniel Fay and sculptor David Sharpe’s creation was revealed to the public in a ceremony close to the park’s memorial archway.

It features two guns, a crown and a religious cross with a soldier’s hat representing different aspects of mourning and memorial.
Next
Previous